Voters will Reject Bonnen BECAUSE of Protection for Power

One of the most insightful columns during this Bonnen-Sullivan meeting debacle is the identification and naming of the bargain that has existed for a good while in the Texas House between the speaker of the House and those who elect him.  The person who identified the bargain (in this article) was Ross Ramsey, Executive Editor and senior political analyst at the Texas Tribune. 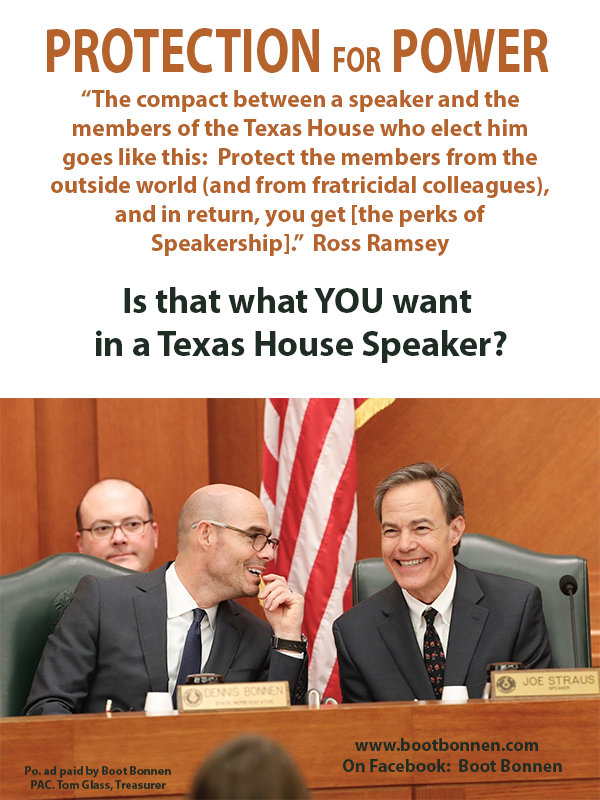 Here is what he said:

The compact between a speaker and the members of the Texas House who elect him goes like this: Protect the members from the outside world (and from fratricidal colleagues), and in return, you get the title, the fancy corner office, the apartment in the state Capitol, and the gavel and the dais when the Legislature is in session.

Protection for power. It’s not a complicated transaction.

One gets the impression from reading this and other articles by Ramsey that he approves of this realpolitik.

The question we want to ask the voters of HD 25 is whether they do.

I think that what voters, the grassroots, and the GOP primary voter want in a speaker is VERY different!  They do NOT want the Power for Protection bargain delivered by both Bonnen and Straus.

What we want is a speaker who will work to implement the principles and legislative priorities of the Party that elected him.  We want to be listened to, not disparaged, lied about, disdained, and ignored.