The Bribery Provisions of the Texas Constitution

In the last few days, I have seen two references to the Texas Constitution’s provisions on bribery.  The context, of course, was the discussion about the legal characterization of the offer made by Dennis Bonnen to Michael Quinn Sullivan in the infamous June, 2019 meeting that has been in the news as of late.

The first mention of the constitutional bribery provision was by former State Rep. Matt Rinaldi on Facebook.  The second was in an article by Texas Scorecard.  The gist of the posts was that the bribery clause in the Texas Constitution is different from the bribery statute in at least four respects:

This whole line of reasoning and possible avenue of approach to Dennis Bonnen got me to wondering about the history of constitutional thinking in Texas about bribery.  Here is what I found.

First, I had not realized it, but the constitutionally required oath of office in Texas found in the General Provisions Art. 16, Sec. 1 not only requires an oath to “preserve, protect, and defend the Constitution and laws of the Unite States and of this State” but it also requires an oath that one is free from bribery/influence when taking office.  That part of the oath says:

I . . . do solemnly swear (or affirm) that I have not directly or indirectly paid, offered, promised to pay, contributed, or promised to contribute any money or thing of value, or promised any public office or employment for the giving or withholding of a vote at the election at which I was elected or as a reward to secure my appointment or confirmation, whichever the case may be, so help me God.

Second, Art. 16, Sec. 5 prohibits anyone previously been convicted of offering or receiving a bribe is ineligible from “holding any office of profit, or trust, in this State.”

Finally, there is the provision discussed above and by Rinaldi and Texas ScoreCard -- Art. 16, Sec. 41 which is entitled “BRIBERY AND SOLICITATION OR ACCEPTANCE OF BRIBES.”  I include the text of that provision which leaves out the inapplicable provisions and focuses on the fact situation with Bonnen/Burrows and Sullivan:

[A]ny member of the Legislature . . . who shall solicit, demand or receive, or consent to receive, directly or indirectly, for himself, or for another . . . from any . . . person, any . . . testimonial, reward, thing of value or employment, or of personal advantage or promise thereof, for his  . . . official influence, or for withholding the same, or with any understanding, expressed or implied, that his . . . official action shall be in any way influenced thereby, or who shall solicit, demand and receive any . . . other advantage matter or thing aforesaid for another, as the consideration of his vote or official influence, in consideration of the payment or promise of such . . . advantage, matter or thing to another, shall be held guilty of bribery, within the meaning of the Constitution, and shall incur the disabilities provided for said offenses, with a forfeiture of the office they may hold, and such other additional punishment as is or shall be provided by law.

I think it an easy case to be made that Dennis Bonnen meets this constitutional provision and is therefore subject to removal from office.  Here is how I think the facts match the provision:

Dennis Bonnen solicited for himself from Michael Quinn Sullivan and his organization a thing of value – to NOT donate to his primary campaign opponent, Rhonda Seth (aka "the nurse"), in 2020.  Given that Empower Texans had donated $100,000 to Bonnen’s primary opponent in 2018.  That is a thing of substantial value.

What did Dennis Bonnen offer to Sullivan and his organizations in exchange for such an advantage or thing of value?  Answer:  Bonnen’s official influence over the press pass to the House floor for Texas Scorecard.

Because I am a fan of Texas history and legal history, I decided to see how Art. 16, Section 41 got into the Texas Constitution.  By reading the journal of the proceedings of the Texas Constitutional Convention of 1875, I found that on September 13, 1875, an F.M. Martin of Navarro County introduced a resolution to add the provision to the Constitution.  As far as I can tell, it was accepted and incorporated into the General Provisions article of the Constitution unamended, and has stayed intact ever since.

I went to the Texas State Historical Association Online to find out more about F.M. Martin.  His full name is Francis Marion Martin, obviously being named after the South Carolina American Revolution hero also called the Swamp Fox.  He was born in Kentucky in 1830, and arrived in Texas at the age of 23 in 1853.  He was elected to the Texas Senate in 1859 as a supporter of Sam Houston. 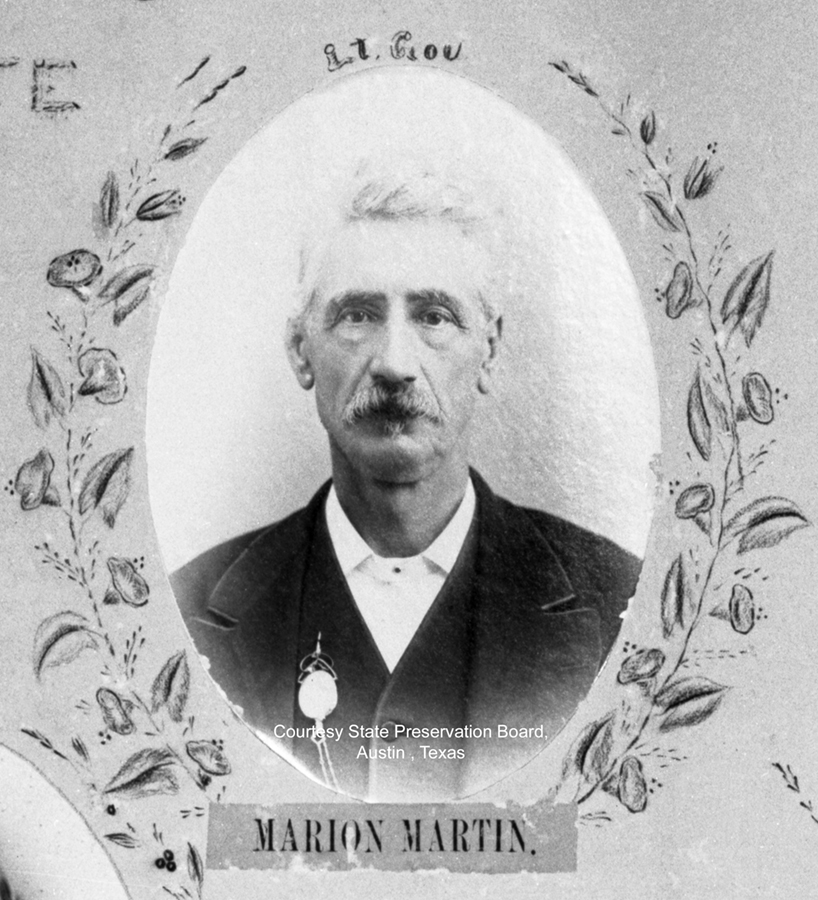 Marion Martin, as we find he called himself, followed Sam Houston on another issue, opposing secession, but after he lost that issue, did his duty and served as a Captain in the Twentieth Texas Cavalry for the Confederate States of America.

He returned to public service in 1875 by becoming a delegate to the Constitutional Convention of 1875.  After that, he re-entered the Texas Senate in 1878 and 1880 and in 1882 was elected Lieutenant Governor. (I obtained the attached picture of Marion Martin from the State Preservation Board.  It was taken from the composite picture of the 1883 (18th) Texas Senate that hangs on the wall in the Capitol.)  He ran unsuccessfully for governor in 1886.

Marion opposed monopolies and was an alcohol prohibitionist.  He was the unsuccessful Lieutenant Governor nominee for the Populist Party in 1892 and 1894.