Bonnen Violated the Right to Petition for Redress of Grievances

Dennis Bonnen has betrayed liberty in many ways. One is his violation of the right to petition for redress of grievances.

It took me a long time to understand what this right was all about and its importance to liberty. This is to talk about the right, its importance, its history, and how Dennis Bonnen has violated it.

First, let’s define the right to petition for redress of grievances. The Texas Bill of Rights, which is the one that is most applicable in this situation, has this to say:

Article 1, Sec. 27. RIGHT OF ASSEMBLY; PETITION FOR REDRESS OF GRIEVANCES. The citizens shall have the right, in a peaceable manner, to assemble together for their common good; and apply to those invested with the powers of government for redress of grievances or other purposes, by petition, address or remonstrance.

The U.S. Constitution also includes a protection of the right from the federal government in the First Amendment:

Congress shall make no law . . . abridging . . . the right of the people . . . to petition the Government for a redress of grievances.

Antonin Scalia said that when you are trying to understand the meaning of the Constitution, you should look to the history known and understood by the framers that motivated them to add a provision to the Constitution.

When it comes to the petitioning the government for the redress of grievances, there is no more concrete example of its violation than the Trial of the Seven Bishops. This story was solidly in the framer’s minds when they set up the original states and federal government.

This trial that concluded on June 30, 1688 with a jury delivering an acquittal of seven bishops of the Church of England was the crystallizing event leading to the Glorious Revolution of 1688 against King James II.

The story started with King James decreeing that all churches read a statement of religious tolerance to their members. The Archbishop of Canterbury wrote a letter to the king urging him to change his mind because they believed the king was not constitutionally permitted to interfere in religious matters. Six other bishops signed the letter and the seven bishops personally presented it to the king. For respectfully asking for what they wanted, the bishops were arrested, refused a grand jury review, and tried for seditious libel.

King James was really seeking to punish the bishops for asking for what they wanted. In doing so, he violated the bishops’ right to petition for redress of grievances.

The jury was stacked by the king, and three of the four judges that oversaw the trial told the jury that all the prosecution had to do was prove that the “seditious” letter had been written and therefore the jury had to convict. One judge told the jury that the ultimate decision was left “to God and your consciences.” The jury listened to the one judge and their consciences.

The trial and the resistance to the king by the seven bishops was the biggest news of the day, and throngs were gathered around the courthouse to hear the verdict. When the “not guilty” verdict came back, there was widespread rejoicing in the streets, and King James II soon left the throne. 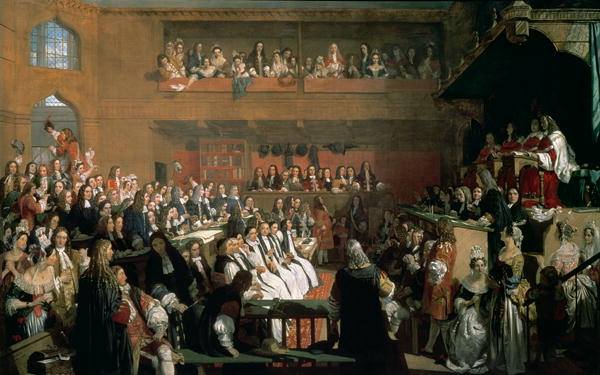 When Dennis Bonnen launched his Alinsky attack on Chris McNutt for leafleting his neighborhood and when he complained about “insane, continuous, vicious attack from these people that live out in the woods in a cave somewhere on an issue that is simply about letting a felon carry a gun,” he was punishing them for daring to ask for what they wanted.

In other words, Dennis Bonnen was abusing his power invested in him as an elected official to squelch redress of grievances by the people of Texas.

There are many reasons why Dennis Bonnen is not fit to be a representative of the people of HD 25, much less the Speaker of the Texas House, any one of which is enough to disqualify him. But this lack of respect for the people of Texas and his violation of the Texas Bill of Rights on this issue is in my opinion one of the most egregious of his many failings.