If We Fail To Root Out Bonnen Corruption, Freedom is at Risk 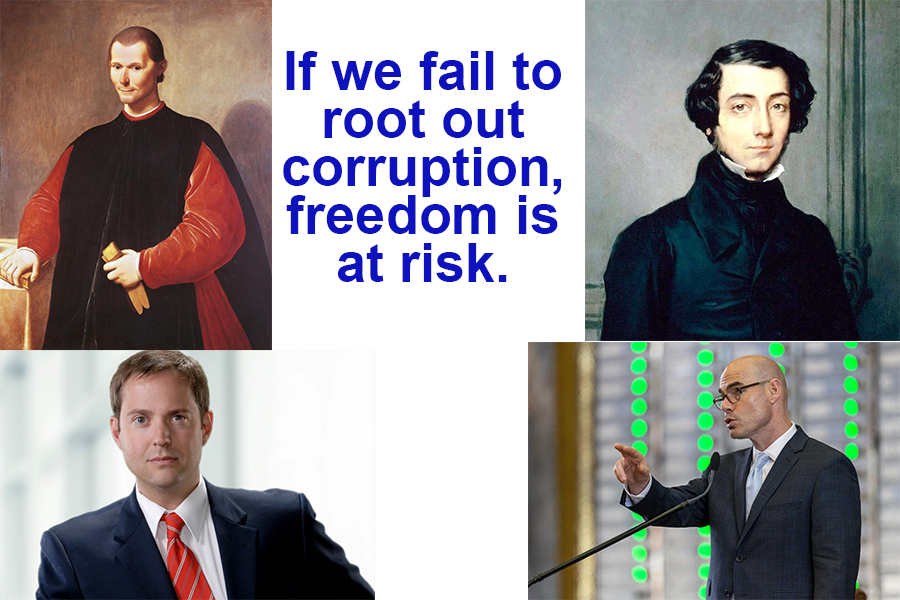 In my youth, I made a mistake.  I thought it was cool to say that all politicians are corrupt.  But then, I encountered Bill and Hillary Clinton, and I changed my mind and don’t say that anymore.  Rather, I state my requirement that politicians NOT be corrupt.

I realized that corruption is a major cause of the loss of liberty and that if we are to stay free, eternal vigilance and intolerance against the natural tendency toward corruption by those attracted to government is an urgent necessity.  I know that to a large degree, American and Texan success is due to that we have historically been better at rooting out corruption than other countries.

I was persuaded of the urgent necessity to fight corruption by this article written by Michael Ledeen and published in the National Review during the height of the 1998 Clinton impeachment.  If you love Texas and liberty, I urge you to read it.  I am going to quote its highlights here and apply it to the current bribery scandal we are facing in Texas with the Dennis Bonnen and Dustin Burrows.

“The punishment of [Dennis Bonnen and Dusin Burrows] is desperately necessary, because if we fail to root out corruption, our freedom is placed at risk.”

“Once the rot sets in, even the finest institutions are useless. “Neither laws nor constitutional systems are sufficient to rein in a general corruption.” [Machiavelli] warns us, adding that once corruption has taken hold of a free nation, it is headed toward tyranny.  Nations wishing to remain free must therefore relentlessly fight corruption. When improper actions are found, the malefactors must be quickly and publicly punished, no matter how great their past contributions.”

No well-ordered republic ever canceled its citizens’ demerits with their merits . . . . Having rewarded a citizen for performing well, if the selfsame man does evil he must be punished without any regard for his good works. And when these fundamental principles are well enforced, a [nation] lives free for a long time: otherwise it is quickly ruined.”

In the case of Bonnen, I am not sure that you can say he has performed well, or has done good works.  In fact Boot Bonnen was created before this latest corruption scandal because he had ALREADY betrayed the voters of HD 25 and Texas.  But you get the point.

“The general principle is that a dramatic action is needed to reassert the state’s first principles, taking a powerful figure and subjecting him to merciless punishment or destruction.”

“The public is far more concerned about corruption than the elites are, and more resistant to its temptations . . .  But if the people are corrupted, democracy is doomed.  Alexis de Tocqueville knew that. He wrote:

What is to be feared is not so much the immorality of the great as the fact that immorality may lead to greatness.”

“If the people believe their leaders achieve power because they are corrupt, the entire enterprise is discredited. Corruption spreads like wildfire, virtuous laws and institutions are overwhelmed, and the common good is smothered.”

I would add that if the young and ambitious think that they gain wealth and power through deception and bribery and theft instead of producing goods and services for others, the wealth of the society rapidly declines because the brightest do not produce.

And once the habits of the people are to cut corners and generally not to behave in a principled way, the military gets hollowed out and ineffective, and the country is ripe to be toppled from without.  If the man on the front line facing the enemy is habituated to NOT doing the right thing and cutting corners, how will he have the courage to fight effectively?  If the soldier on the front line thinks that his sacrifice will just be given to keep the corrupt in power, why should he fight?

“[T]hat is why the punishment of our corrupt leaders is such an urgent task. Corrupt men and women indeed came to power in the United States, and we must demonstrate that we will not tolerate the corruption of our free society. The only way to demonstrate this is to bring them down and subject them to public humiliation. To do otherwise would confirm that the rot has spread from our leaders to the people.”

I started the Boot Bonnen group and PAC to tell the establishment that the voters are tired of Austin serving the cronies and betraying the principles and priorities of the Party which elected them.  My hope was that other members of the Texas House would choose more wisely when they choose their next speaker after Bonnen does not return to Austin in 2021.

The voters of HD 25 may still have to do the cleanup.  But for the good of Texas liberty, let us hope that other leaders in our state grasp what Machiavelli and de Tocqueville were trying to teach us, and take swift, public, and dramatic action to let everyone know that corruption will not be tolerated.

Your future liberty and the fate of Texas depends on how we handle the Bonnen and Burrows corruption.  One way or another, this cannot stand.